California Voting Rights Act
​Demand Letter to WCCUSD
January 20, 2018
Excerpt:  In 2001, the Legislature determined that the use of at-large elections (by cities and districts that are characterized by racially polarized voting) dilutes the influence of minority voting blocs. The CVRA created a private right of action to require the jurisdiction to elect its governing body from single-member districts. For example, Dublin Unified School District recently received a demand letter from the Southwestern Voter Registration Education Project, which led it to adopt districts. On behalf the Bay Area Voting Rights Initiative (“BAVRI”), I give notice of our belief, supported by evidence, that at-large voting dilutes minority electoral influence in the election of board members to the West Contra Costa Unified School District (WCCUSD), thus violating Elections Code Section 14047. The Board should consider this advice as an opportunity to engage the community in a collaborative process that avoids adversary litigation. ...

Rafferty to WCCUSD re CVRA PDF

Existing law, the California Voting Rights Act of 2001 (CVRA), prohibits the use of an at-large election in a political subdivision if it would impair the ability of a protected class, as defined, to elect candidates of its choice or otherwise influence the outcome of an election. The CVRA provides that a voter who is a member of a protected class may bring an action in superior court to enforce the provisions of the CVRA, and, if the voter prevails in the case, he or she may be awarded reasonable litigation costs and attorney’s fees. The CVRA requires a court to implement appropriate remedies, including the imposition of district-based elections, that are tailored to remedy a violation of the act. ...
​
SECTION 1. The Legislature finds and declares that the purpose of this act is to address ongoing vote dilution and discrimination in voting as matters of statewide concern, in order to enforce the fundamental rights guaranteed to California voters under Section 7 of Article I and Section 2 of Article II of the California Constitution. Therefore, the provisions of this act shall be construed liberally in furtherance of this legislative intent to eliminate minority vote dilution. ...
​
https://leginfo.legislature.ca.gov/faces/billNavClient.xhtml?bill_id=201520160AB182 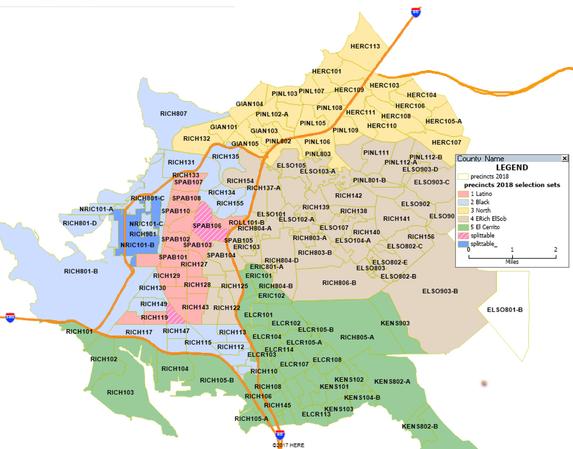 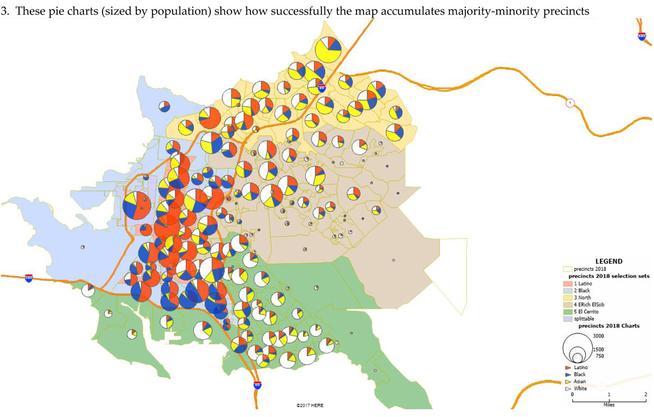 This site is not associated with the WCCUSD.

​​A  Website with resources for Parents, Students and Community members in the West Contra Costa Unified School District (WCCUSD)

​PDF of page 11, plaintiff's proposed map with precincts
Excerpt from 23 page letter to WCCUSD with Proposed Trustee Area Maps. June 4, 2018:
... Both citizens of voting age population (CVAP) and registration rolls probably systematically underreport Latino population, so both districts are likely over 50% on either measure. ...  To determine the number of citizens of voting age, we used the American Community Survey for 2012-2016, which was published in February 2018. ...  Statisticians at the University of California have shown that CVAP systematically under counts Latino citizens.

Excerpt:  In response to a legal challenge charging that its at-large trustee elections are “racially polarized,” the West Contra Costa school board says it wants to let voters decide whether to change from at-large elections to those in which school board members represent specific districts.
A lawsuit filed March 21 by Walnut Creek attorney Scott Rafferty on behalf of two West Contra Costa Unified residents and a group called the “Bay Area Voting Rights Initiative” accuses the district of violating the California Voting Rights Act of 2001, in which plaintiffs say at-large elections give unfair advantages to white candidates in more affluent areas of the district of more than 100,000 voters in Richmond and surrounding cities. ...
“Minority vote dilution has allowed white voters and the area in which they are concentrated to dominate the board,” the lawsuit claims, adding that 35 percent of the district’s population of more than 263,800 people are Latino, 20 percent are Asian and 16 percent are African-American.
Rafferty’s initial letter to the district said most jurisdictions in California the size of West Contra Costa do not conduct at-large elections.
“Except for Irvine, no city with a larger population elects its council at large,” he wrote. “Of the 29 school districts in  California that are larger than WCCUSD, all but nine elect trustees by district.”
Statewide, at least 125 smaller school boards have changed the way school board members are elected to represent small voting districts within the larger ​district as opposed to being at-large seats, the letter said. The change was a response to lawsuits or to orders from their county boards of education.
The district’s attorney, Harold Freiman of the Lozano Smith firm, warned that if voters reject electing board members who represent smaller areas of the district, a court could overturn their decision, saying the vote further confirms that majority white voters don’t want to give minority Latino and black voters — who are concentrated in Richmond, San Pablo and other areas of the district — a chance to elect someone who represents them. That is what happened when voters in the city of Highland, near San Bernardino, voted against creating smaller voting districts within the city, he said.
“If you go to the election and the electorate approves, that’s a fine and good thing,” he told the board. “But if it votes it down, there may be ensuing litigation that the vote is evidence of racially polarized voting.” ...